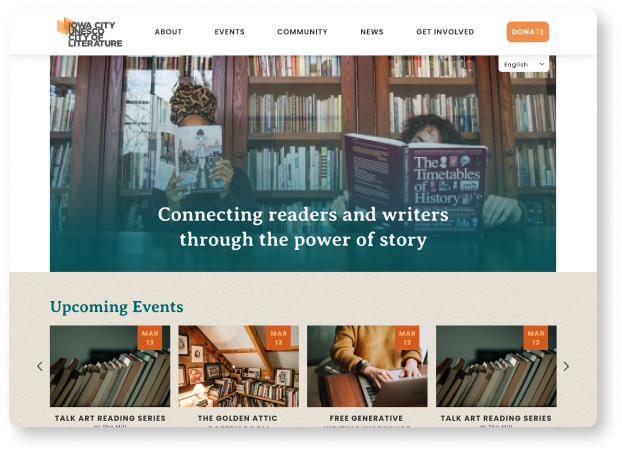 The organization hosts readings, workshops, festivals, and other programming to engage local, regional, and international audiences with literature.

The challenge for this project was to redesign their existing website to make it fully responsive, easy to navigate, and visually appealing. Along the way, I worked to improve the information architecture and expand  their branding. The organization has a small staff, so the site also needs to be easy to manage and update.

A sampling of screens from other UNESCO City of Literature sites.

Key Takeaways
• Many included options for multiple languages, which is important when trying to reach an international audience
• Most had fewer links in the main navigation, but included sections on the homepage to navigate to other areas of the site
• Many included a “places to visit” page and/or a tour app of significant literary sites in the city
• Most displayed events in cards, instead of a calendar format

I performed a remote moderated test on the existing site with 6 people who had a strong interest in literature, 3 of whom were familiar with the organization and 3 of whom were unfamiliar with the organization. I compiled the findings in an affinity map to identify common patterns among their feedback and approaches to navigating the site. Below is a small selection of these findings.

Based on my observations, it became clear that improving the information architecture would need to be an area of focus. Users also noted that the site lacks personality and cohesion, so I knew that I would need to expand their existing brand beyond the logo. 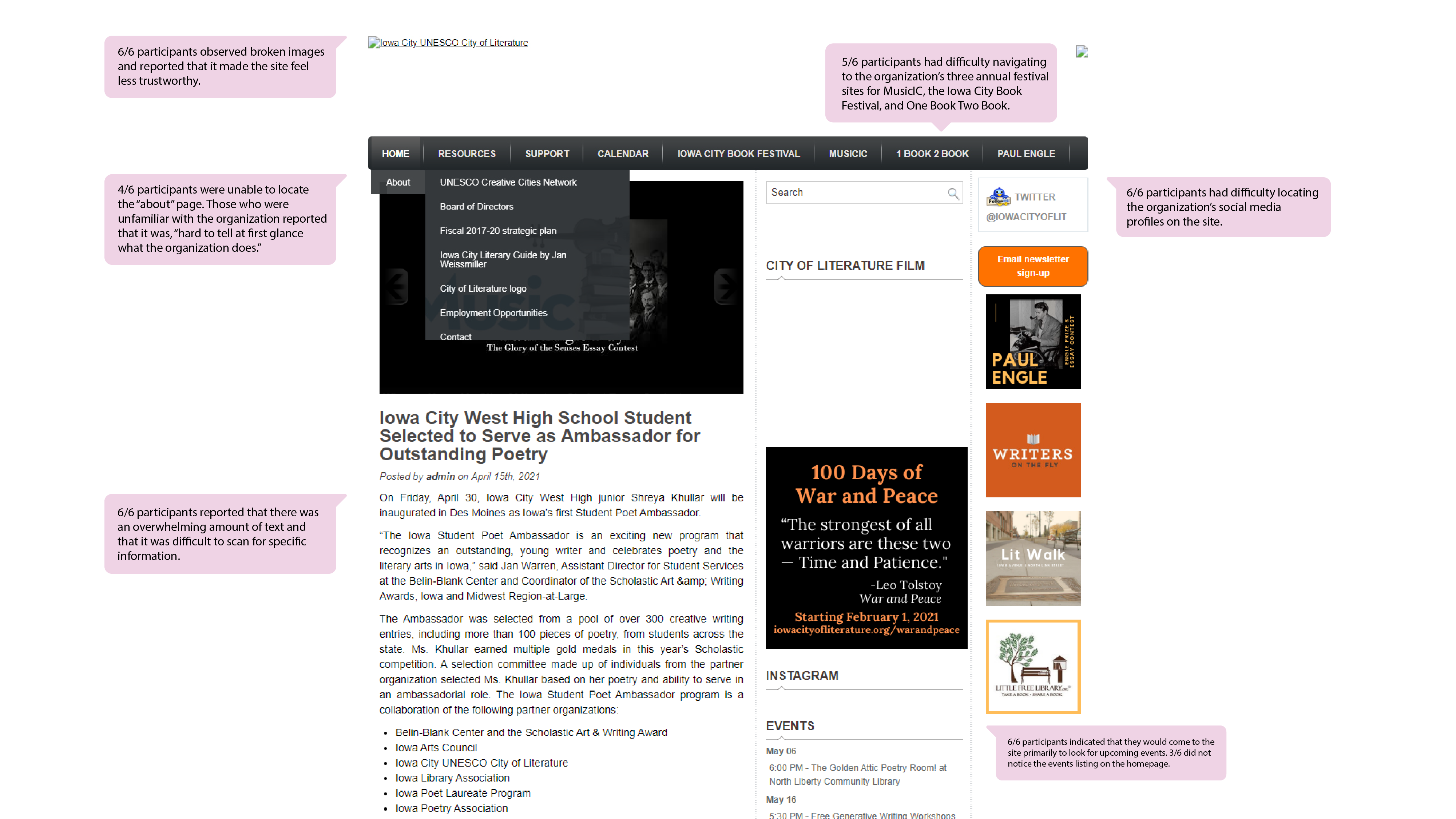 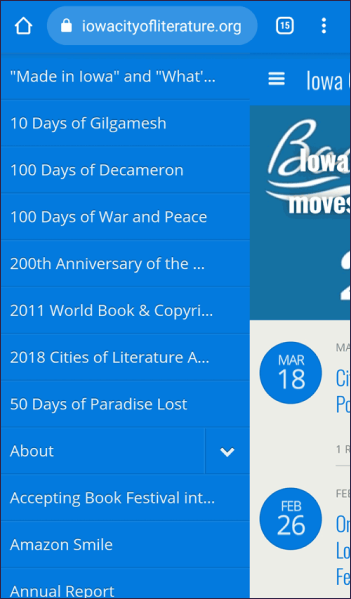 All of the navigation items become lumped together in the mobile version, reducing hierarchy and increasing cognitive load for the user. 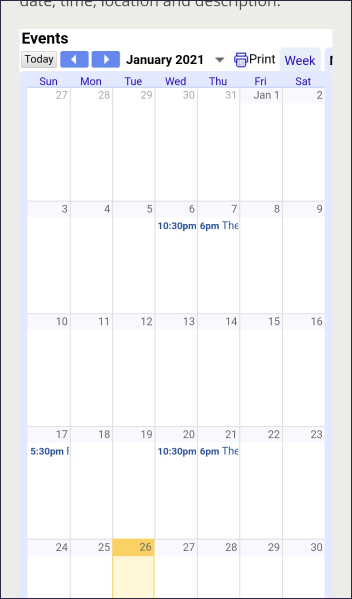 The events calendar is not responsive on mobile, so it is not legible. 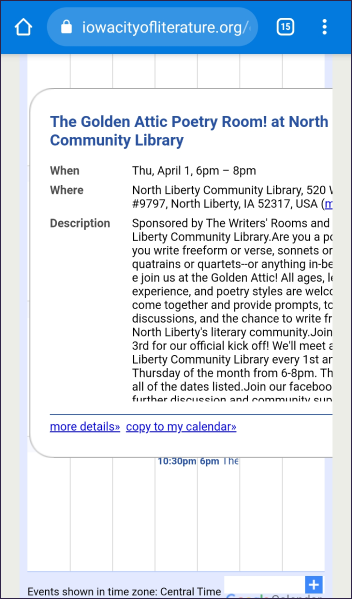 The user is able to access event details by clicking on a time, but it is again not responsive and the user has to scroll around to get all of the details.

I interviewed five participants with a strong interest in literature to learn more about their habits, goals, and motivations for engaging with literary organizations. I then created an affinity map to identify patterns among their responses.

I found that the motivations of the users were tied to their roles. Common roles that I identified among the users included writers, educators, book enthusiasts, and parents. Many of the participants play multiple, or even all of these roles. 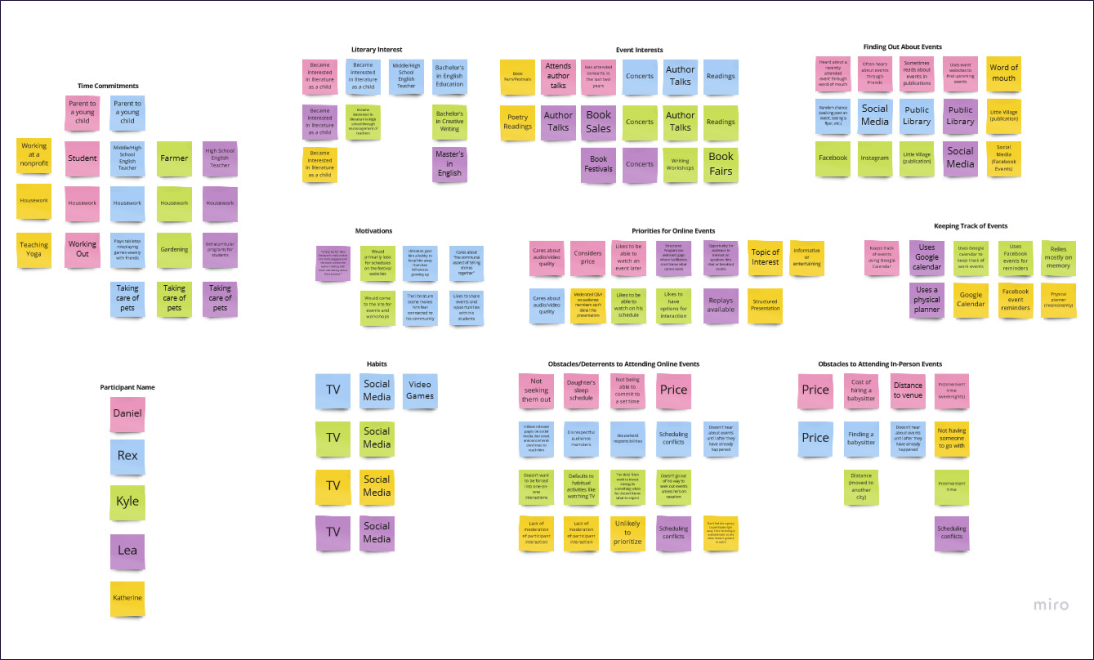 In addition to commonalities in their roles, I identified a few more commonalities among their responses. All of the users reported that literature had a profound emotional impact on their life and that engaging with literature gave them a sense of connection. Below are some other patterns that emerged:

"Around the same time that I became interested in books, a lot of people in my orbit from back at home started to veer off into different paths. A lot of times, going out of my house meant exposing myself to bad influences. Books were something that could keep me at home and keep me engaged in what I value, which is imaginative and creative adventures.”

a desire to connect with like-minded people

“I enjoy attending author talks because it really makes me more engaged with the book to hear the author reading their book and talking about their process.”

feeling busy and
tired from work

“I don’t attend as many literary events as I’d like to. I tend to default to TV when I’m tired from a long day of manual labor.”

The empathy map served to paint a picture of the habits, behaviors, thoughts, emotions, and environmental factors that may shape the user's behavior. 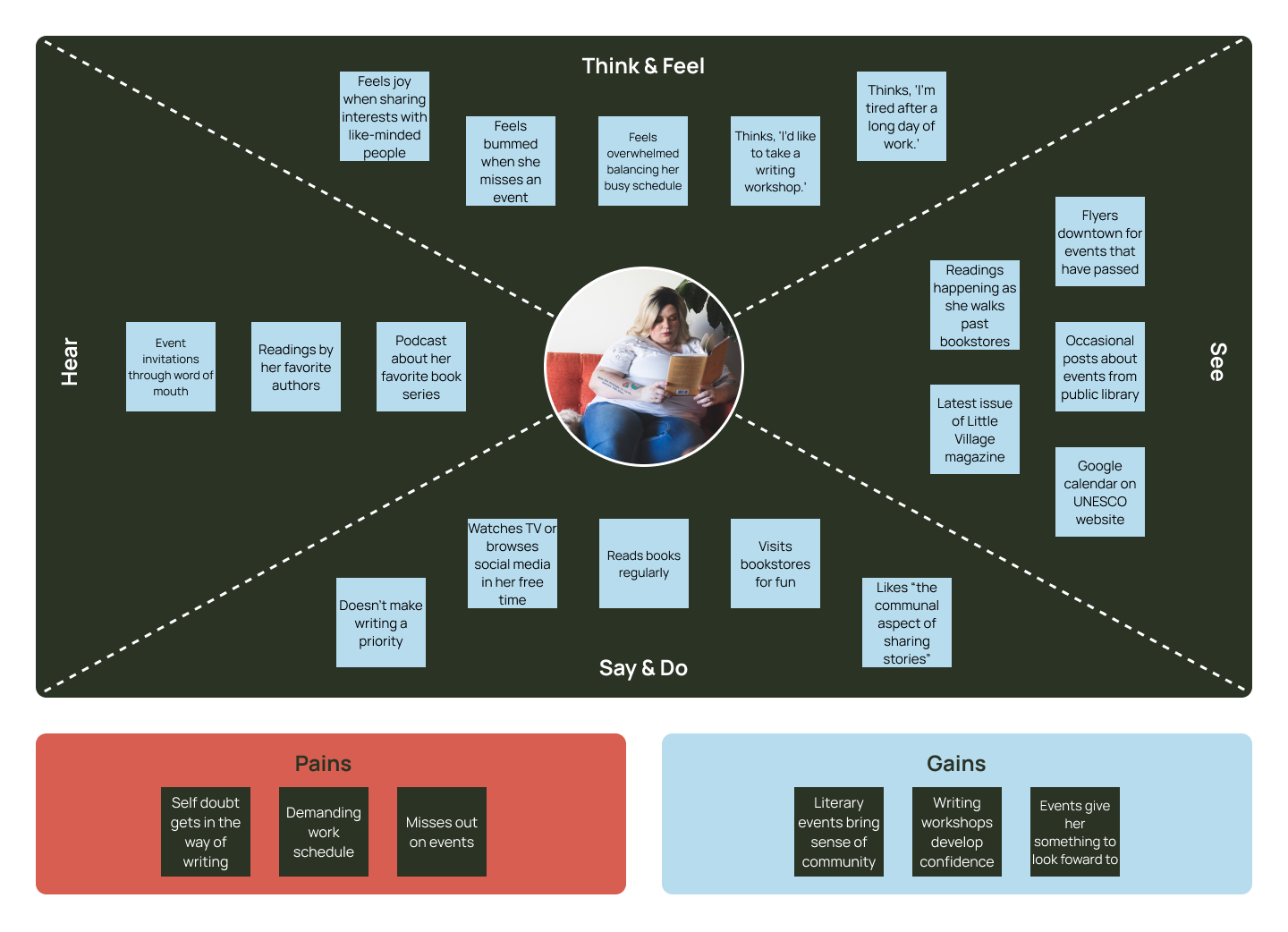 Empathy map to bring together commonly reported experiences of people interested in literature.

Using the frustrations and motivations identified in the user testing and interviews, I developed a fictional persona to embody the needs of the user.  This persona was referred to throughout the process to help center the goals of the user when redesigning the site. 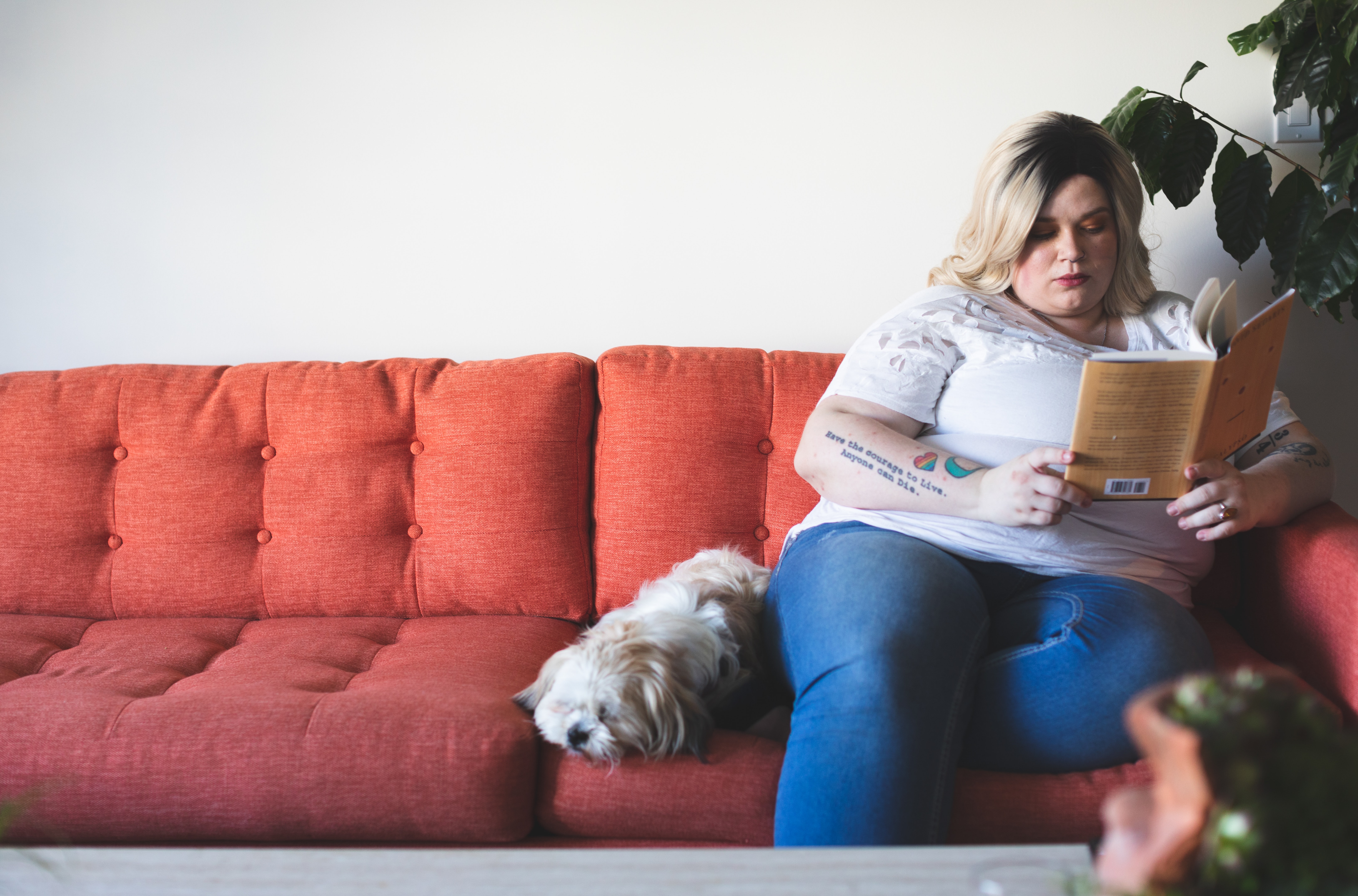 Mia is a nurse practitioner at the University of Iowa Hospitals and Clinics. She often works long and unpredictable hours, which can pose challenges to making plans outside of work. She has been an avid reader since childhood and views the imaginative worlds of books as a welcome refuge from the serious nature of her work. She took a few writing courses in college and dreams of one day publishing her own book.

Mia, a literature enthusiast, needs to stay informed about events so that she can connect to like-minded people in her community.

I developed a journey map to illustrate the emotional highs and lows in the process of finding an event to attend on the Iowa City UNESCO City of Literature site based on user research. This helped me to identify opportunities for improvement to better meet the user’s needs.

Journey map outlining the user's experience of the existing website and opportunities for improvement.

A series of questions were generated to narrow down potential paths to solving our persona’s problem.

Based on user research, I illustrated a scenario depicting a user’s experience on the current site vs. her improved experience with a new event notification sign up feature.

Rapid brainstorming was performed to generate potential features that might help solve the user’s problem. 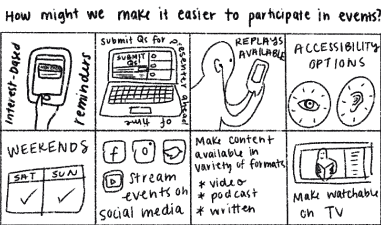 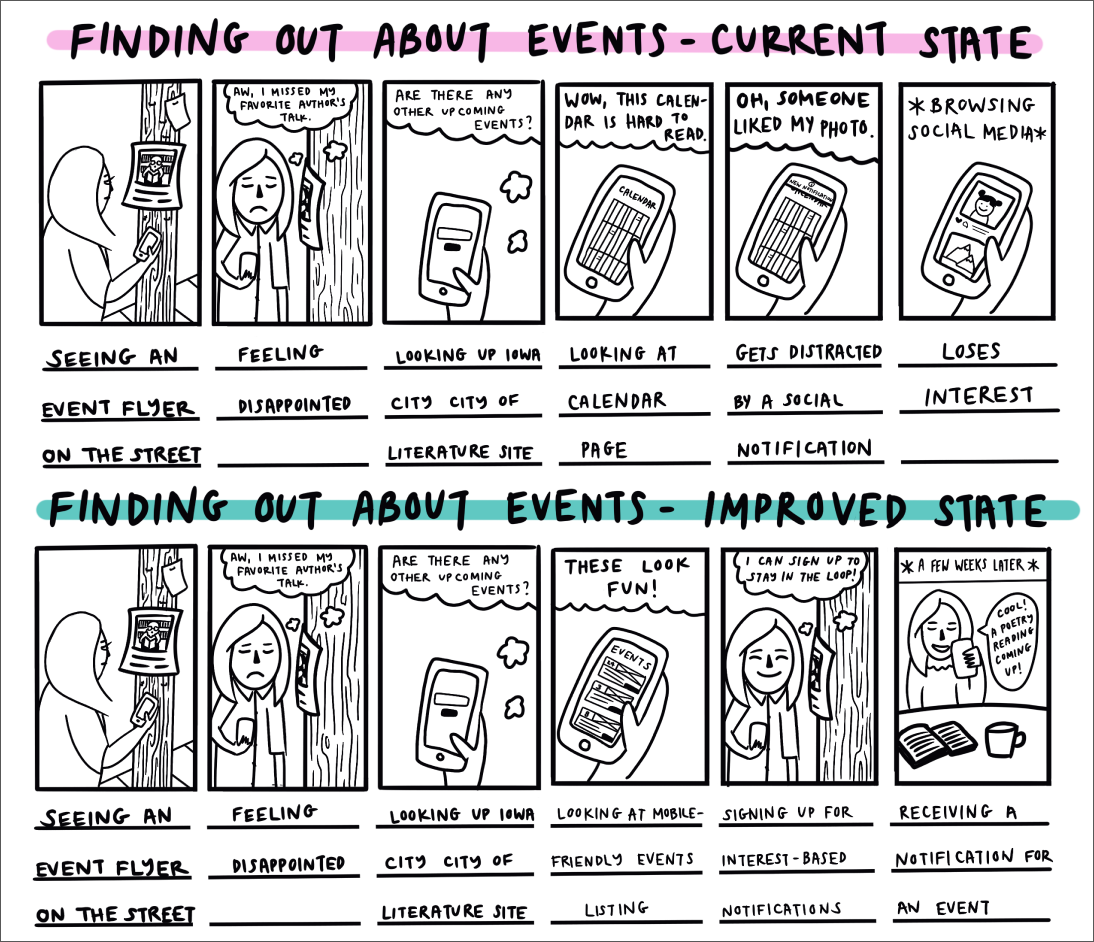 Storyboard comparing the persona's current experience vs. a desired outcome.

Since I had decided to explore the path of implementing an event notification feature to solve the users’ problem, I wanted to better understand other platforms that are currently meeting this need, such as Eventbrite and Meetups.  I also researched Crowdcast, since that is the platform that the organization is currently using to host their online events. 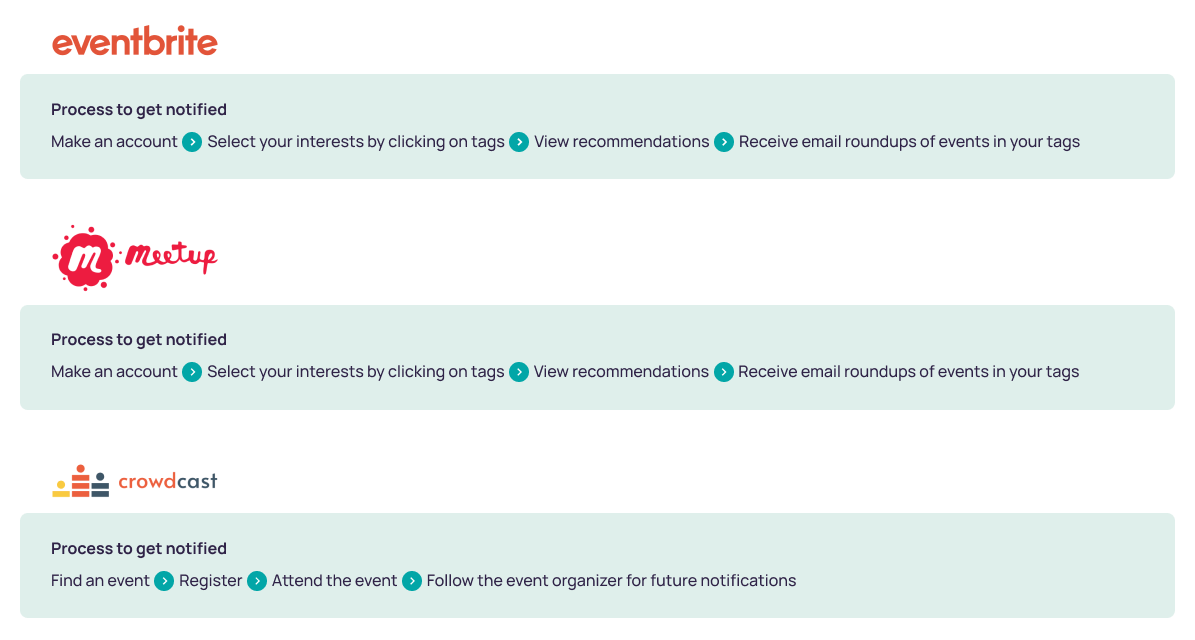 Comparing the process of receiving notifications from popular event platforms.

In order to better understand how users expect information to be organized, I performed a remote card sort via OptimalSort. Participants grouped and categorized the labels from the existing navigation.

• More than half of the participants indicated that some of the item labels were unclear or confusing. If they had not already heard of programs like “1 Book 2 Book” or “Paul Engle,” they did not know how to categorize them without more context.

• The most popular groupings were “about,” “events,” and “opportunities.” 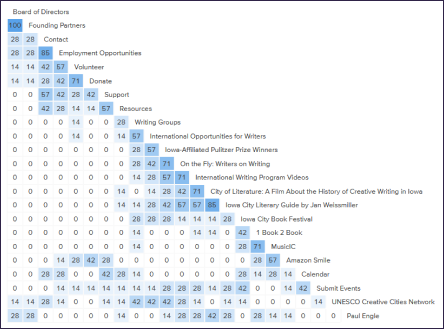 The similarity matrix indicates how frequently each label was paired together by participants.

Based on the card sorting activity and competitive analysis, I created a sitemap that illustrates a way to structure the site to create a clear information hierarchy and simplify the navigation menu. 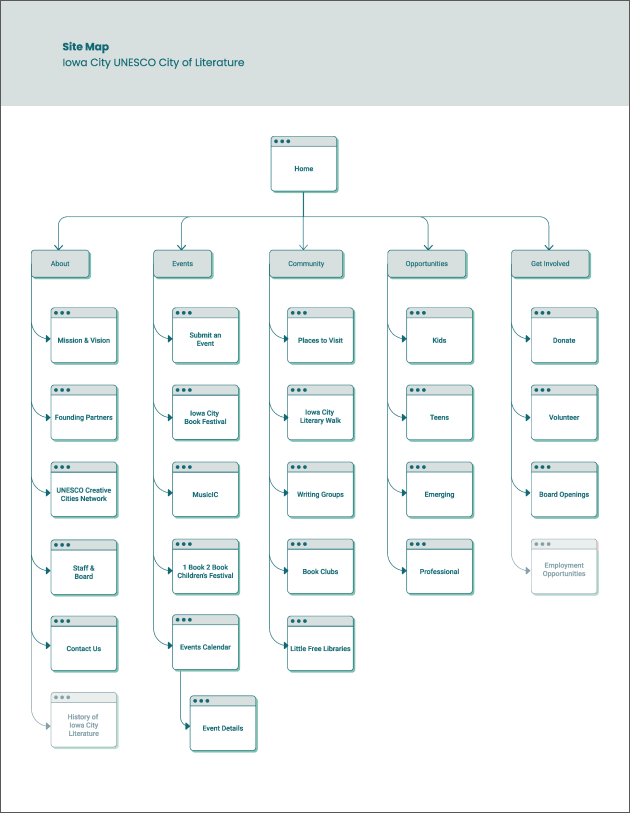 I created a task flow depicting a potential route that a user would take through the site to sign up to stay in the loop about upcoming events. 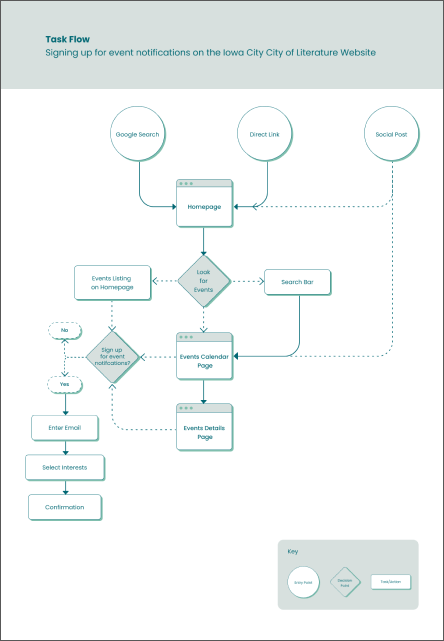 I used Crazy 8s again to brainstorm potential layouts for essential pages in the task flow. Below is a sampling of those sketches. 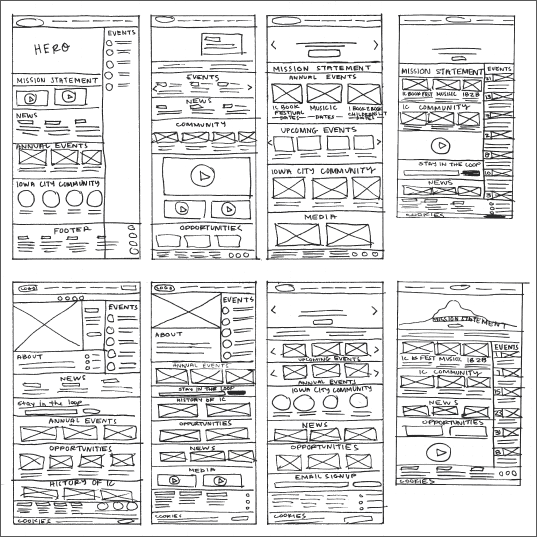 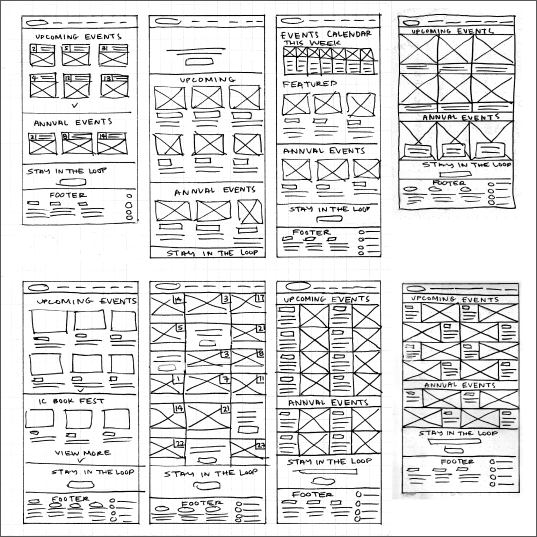 I brought the sketches into Figma and generated low fidelity layouts to test with potential users. 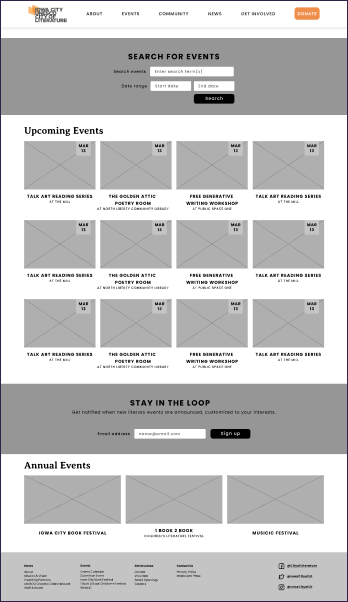 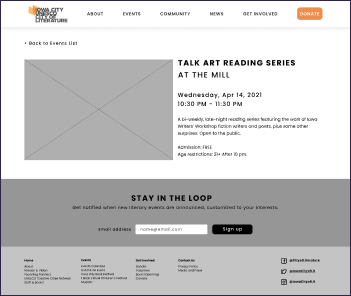 With the style tile, I was looking to enhance the organization’s current branding, keeping in line with the image that they’ve been cultivating for years. They didn’t have any official brand guidelines beyond their logo, which gave me plenty of freedom to inject more vibrancy into the brand. To start, I expanded the color palette, adding a set of secondary colors. Many of the users I interviewed mentioned that they’d like to see a splash of color incorporated because the current color palette is a bit bland.

On the children’s literature site, one of my participants mentioned that he loved that there’s a “plan your day” section, but it’s not designed in a way that looks engaging to children, so he wouldn’t sit down with a five-year-old and explore the site together. I wanted to create a color palette that can be used to engage with both younger and older audiences.

Next, it was on to selecting typefaces. The current typefaces that are used on the site just came pre-loaded with the theme, so I selected a couple that pair nicely with the logo and brand. Poppins is a geometric sans serif similar to the typeface in the logo, but it’s a Google font so it’s free and widely available and will display well on across browsers.

Averia Serif Libre is also a Google font, but it’s a traditional serif font and it has a little of the printerly feel of handset type to call out to the history of printmaking and bookmaking in Iowa City.

The three brand attributes I selected were creativity, tradition, and approachability. Creativity is a reference to writing and the arts in Iowa City. Tradition is a reference to the long history of literature in the area. Approachability is the idea of making literature accessible to anyone in the community and connecting with people of all ages and backgrounds, expanding the organization’s audience beyond people who have ties to the university. 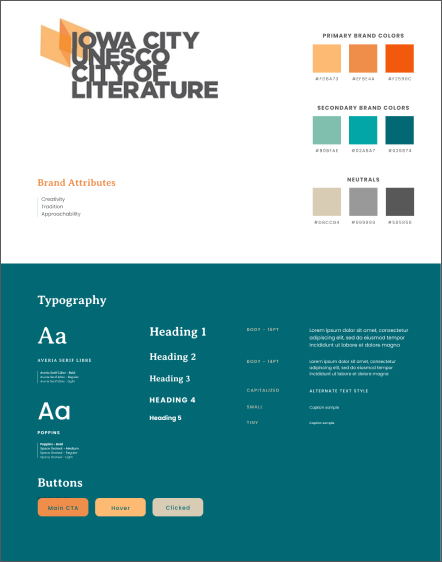 I used the expanded branding to generate high fidelity wireframes for desktop, tablet, and mobile.

• Overall, feedback was very positive and all participants indicated that they preferred the experience of the redesigned site to the existing site

The Iowa City UNESCO City of Literature is working with Little Village Creative Services to design and develop the remainder of the site. I am consulting on the project.

Below are a few changes to implement moving forward:

• Adding a calendar view to the events listing page

This project was a great opportunity to play a small role in strengthening my local arts community by making literary events easier to access. Through speaking with users, I learned that access to literature is extremely powerful and can have a life-changing impact. We are very fortunate to have a strong creative community in the Iowa City area. My hope is that by optimizing the Iowa City UNESCO City of Literature website to better serve the goals and needs of their users, more people will be able to gain a sense of community through their connection to this organization.

Desiree Dahl is a web designer, artist, and illustrator based in Iowa City, Iowa.

Copyright © 2022 Desiree Dahl. All rights reserved.
Content may not be used or shared without express written permission.
AboutDesignBlog
ShopContactPrivacy Policy